New layout once again. Also designed a new logo for myself.

I wrote a short case study on how I created the ladybird scene pictured below. 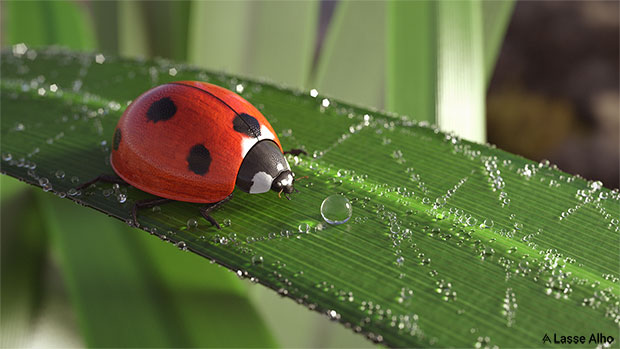 Small update to the layout.

I can't seem to find any time to work on new coding projects between my work and procrastination, damn.
Maybe some day.
Managed to update the layout at least. Been working on it on/off for about a year, starting over multiple times.
Fun stuff.

And in case you're wondering, my surname did change.
Got married in the summer and took my wife's surname, just because Alho is nicer and easier than my old surname Häyrynen.
The old surname is still seen in some of the older projects, can't be arsed to change them all. Would have to repackage the flash projects and what not.

A gallery of pointillism works created with Processing code. Mouseover the images to see the original image.
You can also use the left and right arrow keys to navigate between images.

A small electronics experiment: Stepper motor as a generator.

My own version of the like button made known to us by the social media.

Taken of the view outside my window.

I thought I'd mention this simple calculator addon I did for Firefox a few years ago.

This is the final work for my 3D-animation course, the assignment was to make some kind of an assembly line which assembles something form at least three parts.

This came to mind almost instantly after hearing the assignment. And the particle effect welding sparks right after that

An experiment written in Processing that continuously calculates random positions for the vertices of a polygon and morphs between them. The amount of vertices is also variable.

EDIT: Taken down in 2018 due to lack of use and my lack of interest in developing it further. I left a screenshot there to show what it looked like.

Another one of my older projects done in 2009. A PHP & Ajax based web application for saving and sharing colors you like, feel free to try it out